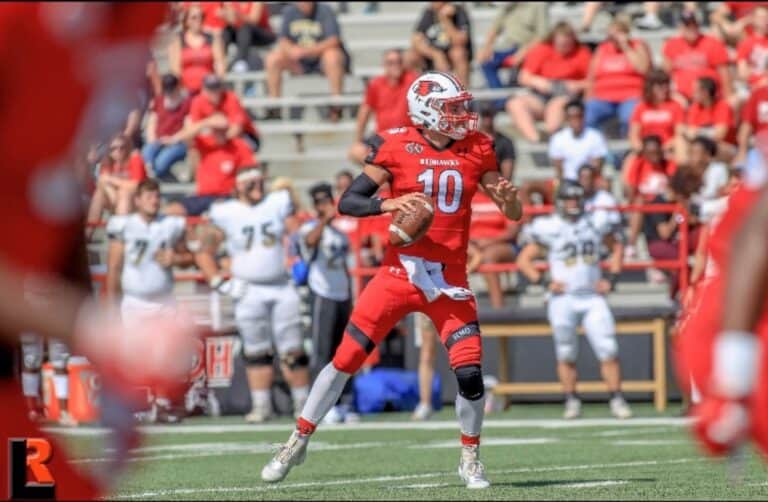 “I had a really good season after all that adversity. If Dr. Romeo hadn’t done such a good job I wouldn’t have been able to do all that I did.”

In the spring of 2015, Daniel Santacaterina was on top of his game. As a high school senior with a ticket to Northern Illinois University (NIU) as a star quarterback, he couldn’t wait to get on campus. There was only one problem: a tendon on the inside of his elbow in his throwing arm was not receiving proper blood flow. What started as a pesky tendonitis during Daniel’s 2014 season soon turned into a serious issue. And by the time his 2015 season rolled around, he was in excruciating pain every time he threw.

One and a half years after the first symptom, Daniel arrived in Dr. Romeo’s office. Initially, he was nervous about the possible outcome, but that quickly changed: “When I walked in, I saw a famous pro baseball pitcher walking out of the office. At that moment, I knew I was in a good spot.”

As soon as Dr. Romeo examined Daniel’s arm and reviewed the MRI, it was apparent that Daniel required a repair of the flexor-pronator tendon, which had torn from its origin on the bone—an issue related to overuse and lack of rest after the initial injury.

Because Daniel’s injury had not healed over a long time, surgery was the most viable option for him. Fortunately, Dr. Romeo made him feel very confident in moving forward with this decision.“Dr. Romeo took a ‘here’s what you’ve got and here’s what you need to do’ approach with me,” says Daniel. “I needed someone who had the same kind of aggressive mindstate about recovery that I had. It was easy to trust him because he’s knowledgeable—he was exactly the kind of surgeon I needed.”

In May 2015, Daniel underwent a right elbow flexor-pronator tendon repair. In this type of surgery, an incision is made close to the prominent knob of bone on the inside of the elbow known as the medial epicondyle. With a chronic injury like this one, it’s necessary to loosen scar tissue and mobilize the stiff tendon so it can be brought back to the bone, then held in place with sutures.

Within hours of surgery, Daniel went home to recover with a padded dressing, a brace, and a packet of specific instructions from Dr. Romeo—including a detailed physical therapy regimen. From there, Daniel headed to NIU and immediately began on-campus rehabilitation. As is necessary after this type of surgery, Daniel’s first month of physical therapy focused on protecting the repair so the tendon can grow back onto the bone. From there, he completed a slow and steady rehabilitation program that is carefully coordinated between Dr. Romeo and his physiotherapist.

By the fall of 2015, Daniel was on the field to participate with the team, however, due to the six to nine months it takes to completely recover from this surgery, he red-shirted to complete his recovery and be ready for NIU’s 2016 season. Within four to five months post-op, Daniel was able to resume throwing. And about a year after surgery, he was “back to throwing like [himself] again.”

“When I walked in, I saw a famous pro baseball pitcher walking out of the office. At that moment, I knew I was in a good spot.”

Unfortunately, Daniel’s struggle with injuries wasn’t finished. During the 2017 season, he fell hard directly on the side of his shoulder during a play and instantly felt pain rip through his shoulder. Although he knew something was seriously wrong, he played for several more months to finish out the season.

Once he sought out medical help, the prognosis wasn’t great. Several orthopaedic surgeons expressed concern that he’d ever play again, as the injury was on the same side as his previous elbow surgery. Also, the tear was of the infraspinatus tendon, a critical part of the rotator cuff—and an uncommon injury for throwing athletes. Furthermore, it had been a few months since his injury, and many surgeons believe that a late repair of this tendon is either not possible or does not return the shoulder back to its pre-injury level of performance.

Dr. Romeo, however, had a different approach. “He thought I could return to play, but he warned me it would take some toughness,” Daniel said. Sure enough, six months after the repair of the flexor-pronator tendon, he started throwing again. And within nine months after surgery, Daniel started the first game of the year for the Southeast Missouri State Redhawks. “After I got back to throwing, it wasn’t long before I was throwing well again,” he adds.

In 2019, Daniel broke his school’s all-time career record in passing touchdowns, leading the Redhawks to victory as the Ohio Valley Conference champions. He also won the National Newcomer of the Year award for the Football Championship Subdivision (Division I). Daniel graduated as the winningest quarterback in Southeast Missouri’s history.

“I had a really good season after all that adversity,” Daniel says. “If Dr. Romeo hadn’t done such a good job I wouldn’t have been able to do all that I did.”

Daniel finished his football career in 2019 and is now leveraging his athletic experience into a career in licensed sports and entertainment sales. He is happy to report no problems with his elbow or shoulder. “I can do everything I want to do,” he says with a smile.