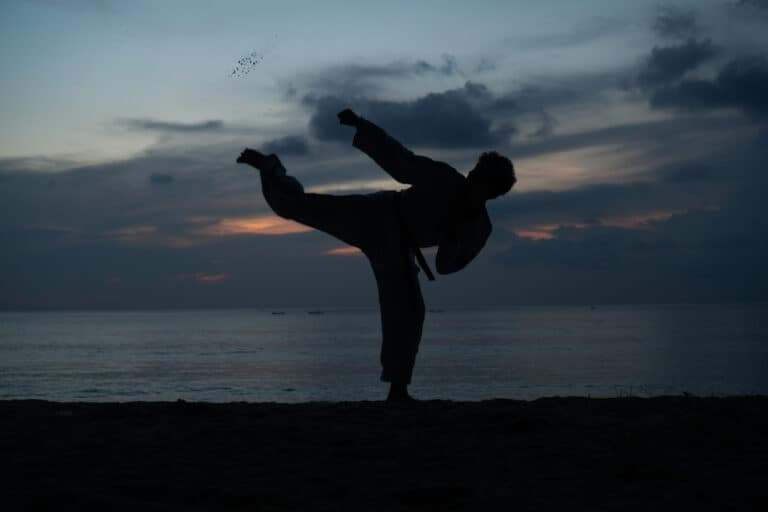 “I’m now three years out from surgery, and I’m still advancing and getting greater range-of-motion.“

In the late 1990s, Paul Beierwaltes started to notice aches and pains in his shoulders. As an avid Hapkido martial arts practitioner and teacher, he fought through the pain for many years before being diagnosed in 2007 with arthritis in both shoulders. However, Paul wasn’t ready to look into surgical options yet, so for the next decade he continued practicing martial arts despite increasing shoulder pain.

At first, the pain was only irritating, but then Paul noticed his range of motion becoming more restricted. “Over time, it became more difficult to put a shirt or a coat on and to bring my hands up to my head,” he says. “It felt like the shoulder was being grabbed. The poking, stabbing pain also interfered with my sleep.”

In 2010, Paul found out that his hips also had severe osteoarthritis. His left hip was so bad that he was hobbling rather than walking. In 2014, he underwent a hip replacement with a surgeon in the same medical group that Dr. Romeo worked in at the time. Paul had already come across Dr. Romeo’s name in his research of shoulder surgeons, so in 2016 Paul got in touch with him to discuss surgical options for his shoulders.

By the time Paul met Dr. Romeo, his shoulder mobility was quite restricted. He could only bring his shoulders up to 105 degrees, and the pain and irritation had gotten much worse. X-rays confirmed that he had severe osteoarthritis (or, “wear and tear” arthritis) in both of his shoulders and painful bone spurs as a result.

Paul decided to proceed with shoulder replacement surgery, starting with his right shoulder, so he could get back to doing what he loved more fully. “Not being able to demonstrate martial arts to others was really preventing me from being really good at teaching others. It was hard to help others improve their art when I couldn’t fully demonstrate.”

The first shoulder surgery was done as an inpatient and used a standard implant. It went so well that after six months, Paul was ready to have the other shoulder replaced. Paul qualified to have his second shoulder done as an outpatient, using a new experimental implant that had seen good results so far.  When making arrangements for the second surgery, Dr. Romeo asked him if he’d enjoy being part of a six-part TV series on outpatient shoulder replacements. If Paul was willing, his case would be filmed and used to demonstrate the advantages of this new approach. Without hesitation, Paul said yes.

“Dr. Romeo and his team explained all of the options. He wasn’t pushing me into either of the surgeries, but it was a no-brainer from the standpoint of the benefits. All I really need to follow his suggestions, etc. Once I had the first shoulder done, it was easy to sign up for another surgery.”

Prior to surgery, Dr. Romeo ordered a CT scan of Paul’s left shoulder. From the images, he used computer software to generate a 3D model that was used to identify the right positioning of the shoulder implant. On the day of the surgery, Paul arrived at the outpatient surgical center in the morning, along with camera crews, and got prepped for surgery. Like most of Dr. Romeo’s shoulder replacements, Paul’s case took less than two hours to do, required minimal anesthetic, and resulted in minimal blood loss.

Within a few hours of surgery, Paul was ready to head home and begin recovery. He left the surgery center with his shoulder in a large sling, along with strict instructions to fiercely protect his shoulder so as not to damage the fresh surgery.

“With both shoulders, I had surgeries on Tuesday and I was teaching my martial arts classes on Saturday with my arm in a sling.”

Paul reports that his pain management after the outpatient surgery, even once the initial nerve block wore off, was quite good. Paul spent the first several nights sleeping in a recliner to prevent accidentally rolling onto the shoulder in the night. He was back teaching martial arts in the gym within a few days—with his left shoulder immobilized in a sling and not being used, of course!

Ironically, the biggest issue for Paul was having a desk job. In his day job, Pal works as an internal bank auditor, and he found sitting at a desk for long stretches of time was irritating. He found it particularly difficult after his first shoulder replacement of his right shoulder, as he is right hand dominant.

Within a few days, Paul started very gentle physical therapy, mainly wiggling his finger and hand to promote blood flow. From there, he progressed to assisted exercises. At his six-week follow-up with Dr. Romeo, he had more motion in his shoulder than he did before surgery.  He was given the all-clear to start doing more doing active motions and using resistance bands as part of his physical therapy. He performed reps of light movements with the resistance bands daily, and noticed new strength and range-of-motion milestones every three to four days.

At three months, Paul was right on track in his recovery. Over the next three months, he advanced his activities and started using weights. He experienced significant pain relief as compared to pre-surgery and was getting a lot of his function back. At six months post-op, he was back to teaching martial arts the way he wanted to, without having to modify any of his movements.

“I really pushed to the limits of what I was allowed to do in physical therapy. I took Dr. Romeo’s suggestions and I took it right to the max of what he said I could safely do.”

Where is he now?

Paul is still practicing martial arts—and recently began practicing a more aggressive form of martial arts. In March 2019, he took up Krav Maga, a fighting system which uses a combination of techniques from aikido, boxing, wrestling, judo, and karate.

“I actually feel even better since taking up Krav Maga,” says Paul. “I might have broken up some of the scar tissue because my range of motion has improved to about 170 degrees now. Three years out from surgery, I’m still advancing and I’m still in a greater range of motion.”

Although Paul has occasional soreness in one of his shoulders, he doesn’t find it slows him down. “With a background in martial weights and weight lifting,” he says, “I’m used to the irritations of soreness. It’s part of doing what I love.”

“I can only thank Dr. Romeo and his team for taking care of me. The surgeries were a short term inconvenience for long term gains.”