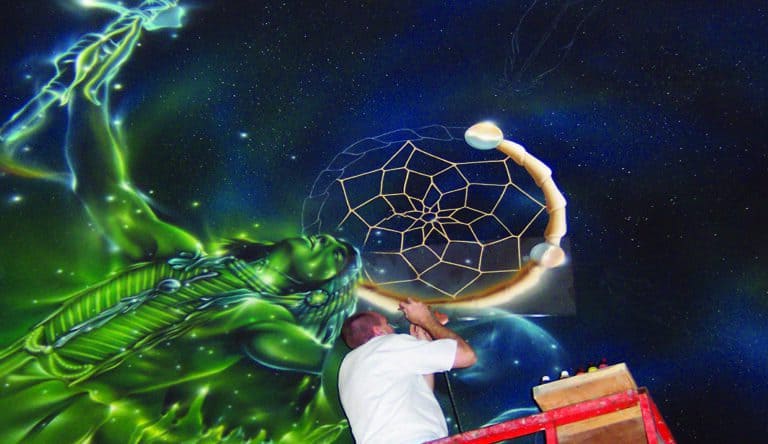 “After all the fear and worry about my elbow, after all the opinions and different doctors—my elbow is now the least of my concerns. And I thank Dr. Romeo for that.”

Timm Etters stood high up on scaffolding, squeezing the trigger of his spray gun with his right hand, when he suddenly felt a tearing sensation rip through his elbow. Dropping the spray gun in pain, he knew something was terribly wrong. Unable to squeeze his hand, make a fist, or use his fingers, he struggled to clean up the mess of paint and pack up his air compressors. By the time Etters got home, the pain was so sharp that it felt like shards of glass in his elbow. No matter how he moved it, it felt like it was tearing it more.

As an accomplished muralist with more than 36 years’ experience under his belt, Etters’ career is one that requires continuous movement over long periods of time. And at the peak of his career, he was painting 22 murals a year—on average—in high schools nationwide. However, all of this came to a grinding halt as Etters began to seek out a solution to the pain he was experiencing.

“I saw four different orthopedic surgeons prior to getting referred to Dr. Romeo,” says Etters. “I was told by all of them that my career was over. One even told me I’d be lucky to sign my name again, let alone draw, paint or do any form of lifting.”

As an artist unable to use his elbow, forearm, or hand, Etters was understandably discouraged. However, this wasn’t Etters’ first tango with serious illness. In high school, he was diagnosed with stage IV cancer. At the time of his diagnosis, he was passionate about the Hip Hop scene and painting graffiti. He painted tribute murals with positive messages all over town, mostly on private property. One day, he got caught by a police officer as he painted a dedication to Vietnam Veterans on a train bridge. As a penalty, Etters was given 132 community service hours. The police officer, a Vietnam Veteran himself, arranged the hours to be spent painting a mural at Etters’ high school.

That single mural launched everything to follow. Etters’ story was covered by the local newspaper, he got to meet the Chicago Bears, and, most importantly, other schools began reaching out to him to enlist his talents. In the midst of all this, he was hospitalized with cancer. Undeterred, Etters launched his mural business from his hospital bed and, after recovering from cancer, painted for the next 30 years until the fateful day of his elbow injury.

“To hear from one doctor after another that this is the end of my dream was devastating. I was miserable for months because it took me a long time to find Dr. Romeo.”

Determined to get back to his dream career, Etters called one of his friends from high school, an ER physician and active athlete in Green Bay, Wisconsin. Etter’s physician friend recommended Dr. Romeo, who had performed surgery on his own shoulder. And so, a few weeks later, Etters found himself in Dr. Romeo’s office.

After reviewing the case, Dr. Romeo diagnosed Etters with a torn extensor carpi radialis brevis tendon—the tendon that is involved with the condition known as “tennis elbow” or lateral epicondylitis. Usually, a small part of the tendon is injured; however, with Etters, the tendon had ripped off from its origin on the outside of the elbow—a remarkably painful and disabling injury. While he had given up hand shakes and carrying heavy objects with that hand and arm, he could not accept the thought that he would not be able to comfortably hold his painting tools in his hand again. Etters recalls the feeling when Dr. Romeo looked him in the eyes, telling him his injury could be fixed and that he would eventually return to work: “That moment re-ignited a spark of hope for me. Maybe my career wasn’t over!”

The good news came with a warning, however—the recovery process would be long, especially because Etters’ previous cancer treatments meant he healed slowly.

After a successful surgery in March, 2015, Etters’ recovery was indeed a long and winding road. Etters completed a lengthy rest and rehab program, finally getting the all-clear to return to work. Unfortunately, he strained his arm on his first project back, while working on a mural in an Ohio high school. Serendipitously, one of the school board members on the job site was a trained physical therapist. When he found out what happened, the kind-hearted therapist did rehab with Etters every day for the duration of the project.

Although Etters managed to complete the mural, it would be his last one for a while. As heart troubles surfaced for Etters, followed by a series of family responsibilities, his mural work became less of a priority. Finally, in 2019, he joyfully headed back to his mural work, ready to dig back in. Unfortunately, his time on the scaffolding would be interrupted once again due to a cancer diagnosis. The battle is ongoing for Etters as he continues through treatment.

Despite all of the life and career setbacks Etters has gone through in the last few years, he remains deeply grateful for the work Dr. Romeo did to get his arm back to full function again. “After all the fear and worry about my elbow, after all the opinions and different doctors—my elbow is now the least of my concerns. And I thank Dr. Romeo for that.”

A full-length documentary is in development about Etters’ life and career, which will include an interview with Dr. Romeo. Etters is also poised to be inducted into the Hip Hop  hall of fame in 2024.