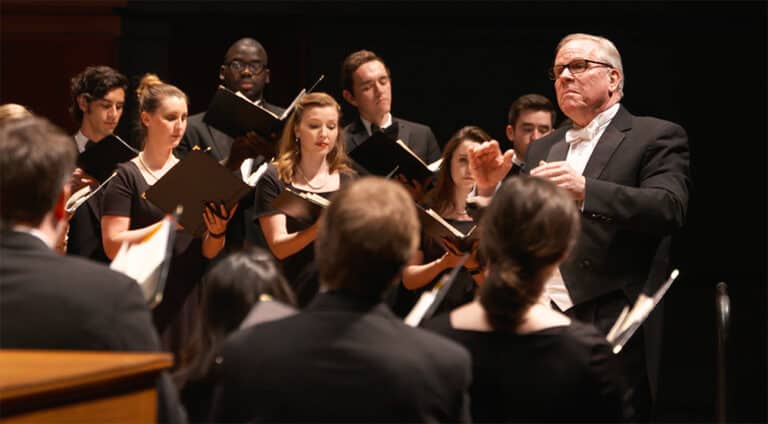 Thinking about my grandfather’s experience with arthritis, I’m very grateful for my surgery—what a gift!

As a Grammy-award-winning choral conductor, Jerry Blackstone was resigned to the fact that his shoulder hurt —it felt like a foregone conclusion as part of his career. “Shoulder pain is one of those things you don’t talk about in this industry,” he says. “Otherwise, who would want to hire you? It’s a little in-house secret.”

For years, Blackstone pushed through the pain. He would get in the zone for rehearsals and performances and ignore it. But afterward, it would return. The worst pain was after long rehearsals with 150-person choirs and 74-person orchestras. Interacting with that many musicians required large arm movements—a wide overhead arc for this, an outstretched arm for that.

Conducting is the communication of musical ideas through pantomime. “You show emotion and give direction with your face, hands, and arms,” he says. As a teacher, he instructed conductors to put all their artistic emphasis into their right hand. “Your right hand shows all the information. Your left hand is like bold or italic on a computer,” says Blackstone. Ironically, it was his left shoulder that gave him the most pain. Although Blackstone sometimes thought about getting his shoulder looked at, there just never seemed to be enough time. Between teaching as a faculty member at the University of Michigan, rehearsals and performances, and spending time with his family, it felt easier to “just suck it up.” During the last twenty years of his career, the pain had progressively gotten worse. A nasty fall on his shoulder involving black ice and a heroic mid-air casserole save didn’t help.

By the spring of 2019, Blackstone had moved into suburban Chicago to live near his daughter and her family. Although technically retired, he covered a sabbatical at Wheaton College. Then the COVID-19 pandemic came and everything stopped. Every guest conducting engagement was canceled. Every rehearsal and performance was canceled. Suddenly, Blackstone found himself with something he’d never had before: time. Finally ready to consider surgery, Blackstone’s family doctor referred him to Dr. Romeo, who ordered x-rays for an accurate diagnosis and then explained the problem—advanced shoulder arthritis with bone spurs—and what could be done about it. Ever the pragmatist, Blackstone wanted to wait until November to have the surgery so he could rake his leaves beforehand. In November 2020, he headed into the operating room for what would be a successful shoulder replacement.

After the shoulder replacement, Blackstone no longer felt like his shoulder was coming out of its socket. Best of all, he could finally sleep through the night without shoulder pain.

Reflecting on his grandfather’s experience, the relief of a successful surgery and the progress of medicine were not lost on Blackstone. “My maternal grandfather had so much arthritis he could barely walk or use his arms. It progressed to the point that he couldn’t use the stairs to get into his own house. Thinking about my grandfather’s experience with arthritis, I’m very grateful for my surgery—what a gift!”

As good as my shoulder feels, I may have retired too soon!

Not long after his surgery, Blackstone happened upon a video of himself conducting. “Now I can see how much I was protecting my left arm,” he says. “I was keeping it low and keeping it near my body. I watched that recorded performance knowing I would have paid a price when I finished that.” In July 2021, Blackstone enjoyed a huge recovery milestone—conducting live rehearsals without having to protect his arm. He conducted almost four hours a day for six consecutive days with no pain. “As good as my shoulder feels, I may have retired too soon!”

Jerry Blackstone is working with a filmmaker and an executive producer on a four-part documentary about choral singing in America. It will explore the power of singing together—through community choirs, congregation choirs, Alzheimer’s choirs, children’s choirs, prison choirs, and more. Anticipated release is early 2023. See the trailer here.