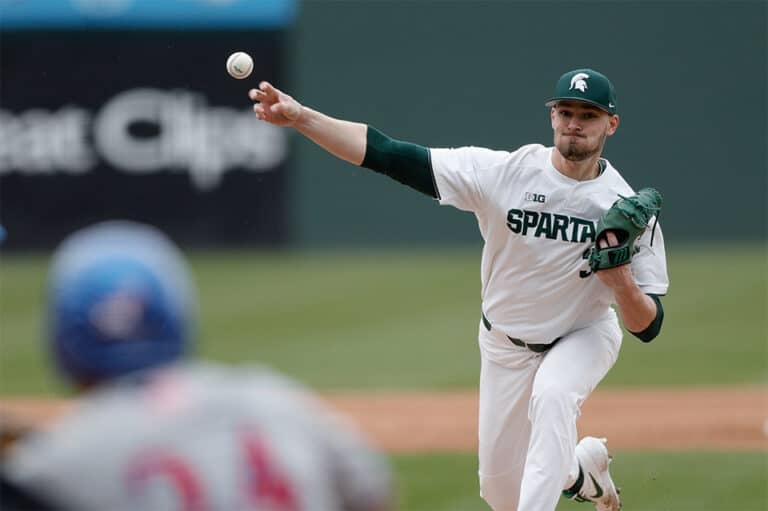 “I really appreciated that Dr. Romeo was interested in my career post-surgery.”

When Mason Erla, a 6’ 4” talented right-handed pitcher stepped up to the mound on February 26, 2017, he didn’t know it would be the last time he would play for several months. It was his freshman year at Michigan State University and the second weekend of the spring baseball season. In the middle of the game, after throwing a fastball, Mason suddenly felt something let loose in his shoulder. It didn’t take long before he got a diagnosis: he had a complete tear of the latissimus tendon in his right shoulder. This tendon connects the large latissimus muscle from his back to the inside of his right arm bone, the humerus.

This kind of tear is fairly rare compared to other pitching injuries, but it can happen during the deceleration phase of the pitch as the latissimus and other muscles such as the rotator cuff work together to slow down and stabilize the throwing arm after the ball has left the pitcher’s hand. The force needed to slow down the arm is so great that the tendon can actually rip off its attachment to the bone. The latissimus dorsi (sometimes simply called the “lat”) is one of the largest muscles in the back, spanning its full width and helping to coordinate forces between the body core and the upper extremity, as well as work in concert with the muscles of the shoulder to provide power as well as delicate control of shoulder movements. When it is injured, it usually causes pain in the back and bottom of the shoulder (in the armpit), with some athletes experiencing radiation down the inside and back of their arm.

“Mason’s main goal was to play baseball for as long as possible, so he happily signed up for surgery in the hopes of prolonging his career.”

After Mason received an MRI that confirmed the diagnosis as well as defined the severity of the tear as a complete tear of the tendon from bone, the medical staff at Michigan State did some research to figure out a treatment game plan. Based on his experience in treating professional and college pitchers, as well as his research specifically related to latissimus tendon tears, the team physician called Dr. Romeo. He is one of just a handful of American surgeons who feels comfortable performing surgery on this uncommon injury, especially in high-performance athletes. Over the last decade, Dr. Romeo has repaired more than 50 athletes with this injury.

In the past, this kind of injury was not fixed. Instead, physical therapy was prescribed. As recently as 2010, the standard of care—even for pro ball players—was to leave the injury alone and rely on rehab alone. However, Dr. Romeo and other senior MLB team physicians recognized that while the pitchers were getting back to the mound, their overall performance often did not return to the level they accomplished before the injury.  This was especially true when the tendon was completely torn off the arm bone.  Dr. Romeo and colleagues studied the results of repairing the tendons versus those who were treated with physiotherapy and rehab programs alone.

Driving toward a solution

Shortly after his injury, Mason drove from Michigan to Chicago to meet Dr. Romeo. Mason’s main goal was to play baseball for as long as possible, so he happily signed up for surgery in the hopes of prolonging his career. He had already undergone an ACL repair in his senior year of high school, so he was familiar with the surgical process and post-surgery rehab involved.

“I was glad to have a surgeon who was eager and willing to do the work that needed to be done,” says Mason. “It was easy to work with Dr. Romeo and I really appreciated that he was interested in my career post-surgery. He shows real interest in his patients after surgery, which I think speaks to the type of person that he is.”

After surgery, Mason had a smooth recovery, doing all his physical therapy through Michigan State University and rehabilitating through the summer of 2017. His recovery was partially supervised by a committed athletic trainer who was invested in getting him healthy again and back in the game. Within approximately nine months after his injury, Mason was back on the mound throwing.

“The first year back to playing there was quite a bit of soreness that I had to deal with as I went along,” he says. Because there is only a small population of patients who have had the surgery done, Dr. Romeo couldn’t give Mason an exact prognosis and instead told him to stay aware of how his shoulder felt and play accordingly. Although he dealt with quite a bit of discomfort while playing in the first year post-operatively, he threw the first season without any major issues. To manage the pain, he found it helpful to keep moving in the dugout—constantly stretching, using resistance bands and PlyoCare Balls, getting stretched, and using heating pads during the cold Michigan season starts.

Since then, Mason has gotten back to his pre-injury level of performance and even surpassed it, consistently throwing at 97 MPH. In the summer of 2019, he took part in the DriveLine pitching program, which he credits with both improving his velocity and fully solidifying his surgical recovery. He has no injury-related symptoms and no lingering shoulder soreness related to the surgery.

The pandemic greatly altered the 2020 MLB draft, so, against all expectations, Mason has not yet been drafted into pro ball. Dr. Romeo is eager, however, to see what lies ahead for this talented young pitcher who shows much promise and resilience.